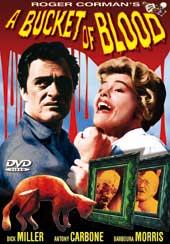 Bucket of Blood (1959) directed by Roger Corman, shot in five days, in my mind, is an amazing film. It combines everything I love, cats, hip daddy-o dialog, art and late 1950s style set against the backdrop of a coffee house. These elements are rolled into an unsettling look at how people can be fickle. Despite the gory title it’s more of a dark comedy.

(Spoiler alert!) The story follows an awkward man named Walter Paisley who works as a busboy at a beatnik art house café. He’s constantly surrounded by artists and he idolizes them, while they treat him as a servant. One night he accidentally kills his neighbor’s cat and decides to hide the cat by covering it in clay, knife and all. He then takes this clay sculpture to the art dealers that run the café. The dealers are amazed at the realism that Walter has brought to the sculpture entitled, “Dead Cat”, and decide to feature it on a table for all the patrons to see. It gets positive attention and Walter gets his fifteen minutes of fame as an artistic sculptor. The other artists that frequent the café encourage him to continue sculpting... and his newest sculptures look like people! His secret is eventually discovered and he goes crazy and hangs himself. 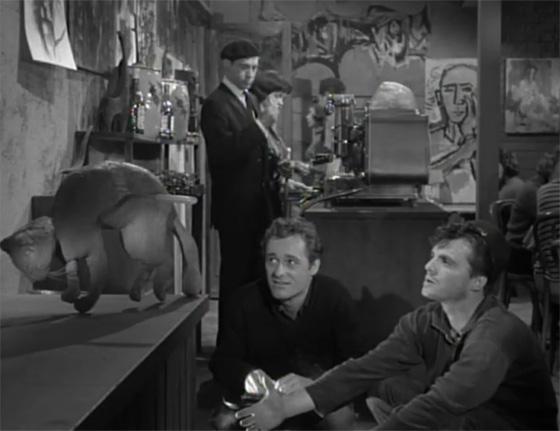 All he was trying to do was “make them immortal”!

The second movie, The Corpse Grinders (1971) directed by Ted V. Mikels, is a so-bad-it’s-good movie. The dialog, acting, and story are bad, BUT the clothing (especially the super tight mens pants), gratuitous cleavage shots, and the fact that they used real cats in the crazy kitty scenes really makes up for it. 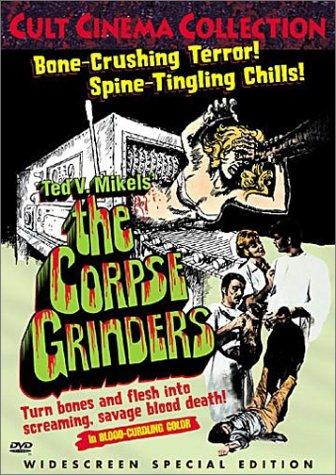 (Spoiler alert!) The story is about a cat food company in financial trouble that seeks out a new source for meat. They start grinding up dead bodies for raw materials. The major problem with this is that the kitties start craving human flesh and attacking people! Well eventually some peoplefigure out the company’s special ingredient and stop the production. 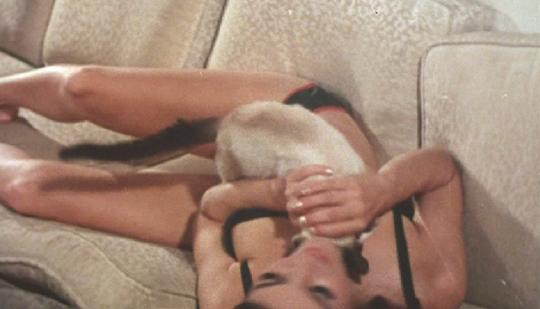 Kitties in horror movies? Yes, please! The actors were holding the real live kitty cats up to their necks like they were being attacked, but really it just looked like they were being cuddled to death. To me this was the best part. As far as I know, no kitties were harmed in the making of this movie. But some people might have been ground up. Muhahahaha!

So support your local movie houses, and watch some fantastically bad movies. They can bring you great joy and memories! I like my movie memories with kitty cats. ;)

About The Screening Room

The Screening Room (http://www.screeningroom.net/) in Amherst, NY is one of my favorite places to see movies. It’s an intimate little cinema / cafe in a storefront space that’s hidden around the side of a plaza. So if you know where to find it, you feel like part of a secret movie society with an exclusive membership!

I’ve gone to the Screening Room off and on now for about fifteen years. It’s inexpensive, plus they show great movies. I’ve seen so many movies there over the years including such memorable classics as 2001:A Space Odyssey (Some of the audience fell asleep. LOL.), Clerks (It was so packed, I sat all the way in back on a stool against the wall.), Charade (I had to make reservations because of tons of my friends wanted to see it. I think we had a party of 10.), Casablanca (which they always show for Valentine’s Day), and even Buffalo Screams -- a local horror movie festival. The Screening Room also rents the space out for events and they serve beer and wine, popcorn, and movie type nibbles. For summer, they have specialty ice cream drinks based on movies. Yes, it’s a fun place. The same SUPER NICE people have been running it this whole time and I don’t even know their names! (I probably should.)