Hi Friends. If you did not know, we had a beautiful little girl named Ginger. She was a huge part of our lives for almost 16 years, and part of everything we did at the store too. She also happened to be a cat.

Ginger's health has been in decline since about 2017. We really thought she was going to go then, so in a way I was kind of prepared, but little did I know how truly heartbreaking it is. Then she had a bout with acute pancreatitis in 2018, so again we thought her time was up when we went against the vet's orders to bring her home, but her last day was Friday, February 5, 2021.

Early last week she started throwing up all her food. She couldn't keep anything down, so we took her to the vet. We knew she had kidney disease and some other problems. She was still active and bright eyed. They gave her fluids and tried to get her to keep food down. She had loose poops all over. Xrays showed nothing was wrong, no obstructions, just immediately throwing up after everything she put in her mouth.

Thursday, February 4 we brought her home hoping to have a few days left with her, and we scheduled her final vet appointment for Monday (or today), but in true Ginger fashion she showed us she needed to go sooner, so we had to move her visit to Friday! She was throwing up blood. Thursday night we watched her favorite show Supernatural. (I've been blogging about Supernatural for a long time on my personal blog Fluffy the Vampire Slayer  and Ginger was always my lap buddy. We needed to watch the last part of the last season.) She always loved Sam's gentle voice and even though she couldn't hear him I think she found comfort in it because it was the only time Thursday night she wasn't restless. 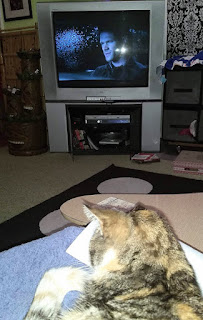 (Yes, my TV room is a mess right now and we have a clunker TV.)

After watching TV, I wrapped her in a towel and brought her upstairs to bed. I sat up with her all night long and while she was still sitting on me at 3:30am I wrote this...

When Andrew and I bought our house we were so excited because that meant we could get a cat...or cats. Shortly after moving we casually went to PetSmart looking at cats up for adoption. They have cats from the SPCA Serving Erie County and that's what we were looking for. We knew we didn't want a kitten because everyone wants a kitten and they are easily adopted out. We wanted an older cat with an established personality.

There were several cats there with stories that pulled at your heart strings, but we ended up with two cats that picked us. I saw this tiny two-ish year old cat with pretty coloring and asked to hold her. She immediately started purring loudly. She was probably scared but I took it as a sign that she picked me to be her owner. Her name was Cinnabon, or as I like to call her Ginger. Andrew connected with a chubby black cat that was abandoned with yellow teeth. (He was likely abandoned because he ate them out of house and home.) His name was Skoal or as we now call him Vicktor, but his story is for another day. That cold rainy night we unexpectedly came home with two cats ~ our dream was becoming reality. 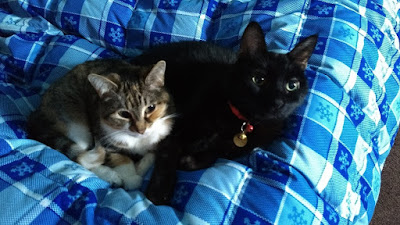 Ginger Rogers & Vicktor Frankenstein.
Ginger was a stray and never gave up being nervous around loud sounds and strangers, but she could hunt and defend herself that's for sure! A feather cat toy was no match for 5.5 lb. Ginger. (Her full name was Ginger Rogers Davis because she's light on her feet.) She had nails that were razor sharp but never once swatted or clawed at anyone or anything. Not a mean bone in her body, except when it came to bugs. I once caught her eating a wasp in our house. That's how hardcore she was. Cute but fierce. She gave Vicktor a run for his money a couple times even though he's twice her size. But for the most part they got along and tolerated each other especially when it was cold they would huddle together and snuggle. 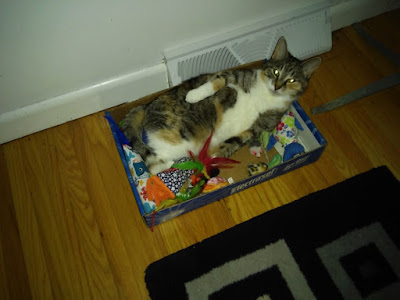 Paint me like one of your French girls....in a toy box.
She was a funny cat, here's a couple tidbits... She was one of those cats that would stare at you from the end of the hallway. Just penetratingly stare and you could feel it. She'd sit on your lap for hours until you had to pee, then as soon as you came back she'd sit on it for a few more hours. She once crawled up the screen of our sliding glass door, so she was stuck between the screen and door. We didn't know where she was until she started meowing and we had to get her down. Once we were sitting eating dinner with a stick of butter in the butter dish. She jumped up one side of the table grabbed the butter in her mouth and jumped down the other side of the table like a ninja it happened so fast! We chased her through the house with butter in her mouth. But she was never big on food. She was big on love. You could just look at her at the other end of the hallway and her purrs would start. Ginger's motors running! 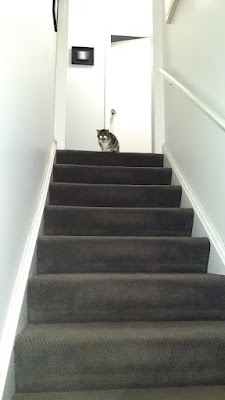 Ginger doing her staring thing.
She's been my baby through it all and made me smile everyday no matter how bad it was. She was there when I started Cats Like Us and even modeled on some promotional postcards. She's always been my rock. I guess she was an emotional support animal before that became a popular thing.

In her 18ish years with us she's had several health problems that taught me so much about cats. Ear mites, teeth infections, eye lesions, stress grooming, infected anal glands, feline herpes, dehydration, stomach upsets, ending with chronic kidney disease. The CKD started about 3 years ago, but now... she's used up her 9 lives. This past week has been hellish to say the least. Last night she was just getting sicker, and you can tell she's trying to purr but can't. My heart is broken. We had to make the hard decision. We are taking her for her final vet visit tomorrow. A little part of me is dying inside, that part weighs 5.5 lbs. 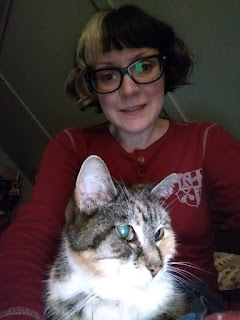 The last picture I have with Ginger taken at 4am Thursday night.
I wrote Mourning Your Beloved Cat four years ago and now I find myself referencing it. I need reassurance that we did the right thing. She had all the best qualities you could ever want in a cat. To say we are devastated is an understatement. Vicktor seems clueless. I'm just trying to take it day by day.
Thanks for reading. I just had to get this out there.
~Julie Ann
Share Share on Facebook Tweet Tweet on Twitter Pin it Pin on Pinterest