We are proud to be featuring Kyle J. Kaczmarczyk, a Buffalo, NY native whose creative talents can be seen in his work. He will be spending the day with Cats Like Us selling comics and artwork. He will also be around to answer any questions you may have about art, comics, and publishing and to autograph your purchases.

Kyle is not only a writer and but illustrator too, and best known for his work on the WWII zombie anthology FUBAR Vol. 1: European Theater of the Damned as well as his creator-owned comics The Red Eye, Pulp, and The Misadventures of Silent Boy. He also worked as an illustrator on MonsterMatt’s Bad Monster Jokes Vol. 1. Kyle has worked on several other comics as well, including Horror Haikus #1, The Small Press Commandos’ Jack Kirby Challenge, the upcoming FUBAR Vol. 2: Empire of the Rising Dead amongst many other projects. He is currently writing Issue #8 of his new series Igor: Occult Detective and drawing issue #7 of The Red Eye.

Personally, I like to compare his artwork to the German Expressionists, dark-shadowy and foreboding with simple lines. His comics really read like a well thought out movie, and if you come by and meet him, you’ll see just how his mind works. He’s a busy fellow, so don’t miss out on this opportunity! 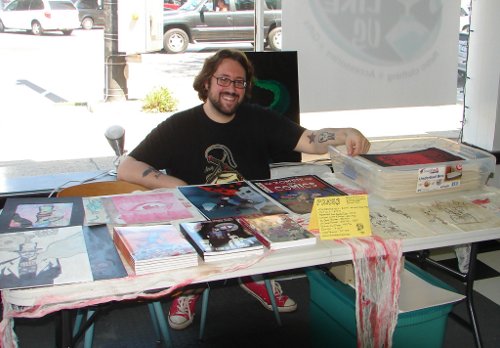